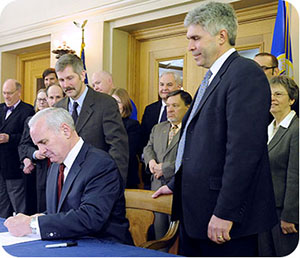 The road to the bill signing was filled with extensive stakeholder input and debate. Countless hours and a wealth of knowledge was dedicated in the early planning stages by numerous individuals who served on the Advisory Task Force, Technical Work Groups and Inter-Agency Committees. At the legislature, the House and Senate bills were introduced by State Representative Joe Atkins (DFL - Inver Grove Heights) and State Senator Tony Lourey (DFL - Kerrick). The bills passed through 18 committees, had more than 150 amendments proposed and received 90+ hours of debate.

The Governor's signature of House File 5 was the final step in forming a Minnesota-based insurance exchange.